On the 21st of May we sent Benjamin and his twin brother Joshua on holiday to Butlins in Skegness where Mr Maker was due to do a live show! Thank you Mr Maker for making the boys feel so special, they were treated to a backstage VIP meeting with their hero and crafted some bugs together. Huge thanks also to Butlins for making the Wish extra magical by kindly providing accommodation, meals and the memorable treat of meeting Diversity!

Thank you Mr Maker for making the boys feel so special, they were treated to a backstage VIP meeting with their hero and crafted some bugs together. Huge thanks also to Butlins for making the Wish extra magical by kindly providing accommodation, meals and the memorable treat of meeting Diversity!

Here's what Benjamin's dad wrote about their special holiday:

Dear Barbara and the Team at When you wish upon a Star,

Thank you so much for arranging a very special trip for Benjamin and for including his very supportive brother Joshua.

The boys were very excited during the trip over to Skegness with the usual childlike comment “are we there yet?” throughout the journey.

It wasn’t long before we were there, parked up and on our way to the Reds building to meet Mr. Maker. The boys managed to get a sneaky peak of Mr. Maker whilst he was having photos with children who had watched the previous show, I’m not sure if this reduced the nerves or added to the excitement? A very nice young man called Dean who is Mr. Makers manager met with us and gave us an idea of what to expect. We were then taken to the dressing rooms backstage to wait…

…after a short while there was a knock at the door! In came Mr. Maker and his friends (Jenny from the show and Dean the manager) from that point on the boys were in fits of giggles spending time with their TV hero. Benjamin had said several times “I hope we can make something with Mr. Maker”. Luckily Mr. Maker had pre-planned something. They made Pom Pom Bugs, joked and chatted about some pretty random stuff which was really nice to watch and listen to. The boys were presented with some special Mr. Maker presents including a signed VIP Mr. Maker Lanyard (now proudly displayed in their bedrooms) and some arts and crafts sets.

After meeting Mr. Maker we were escorted to our VIP table with perfect view of the stage in readiness for the show. All four of us enjoyed the show and we got some special waves, winks and even a mention from Mr. Maker and Jenny throughout the show.

We were due to come home on Sunday afternoon but we noticed in the program of events that Diversity were there with a mid-afternoon show. The boys love Diversity and have watched them many times on television. They love ‘Britain’s Got Talent’ and always comment on being able to dance, somersault and do tricks just like Diversity and the many dance groups on BGT. We enquired at reception about the possibility of staying to watch the show and some very kind people arranged for a B-Line (queue jump) pass to ensure we got a good seat. We later received a telephone call from a lady at Butlins to say that they had reserved places for Benjamin & Joshua in the Diversity Dance Academy. They truly loved this and got the chance to be taught a routine by Diversity. Unfortunately they didn’t get picked to perform in the show but they still had a great time! 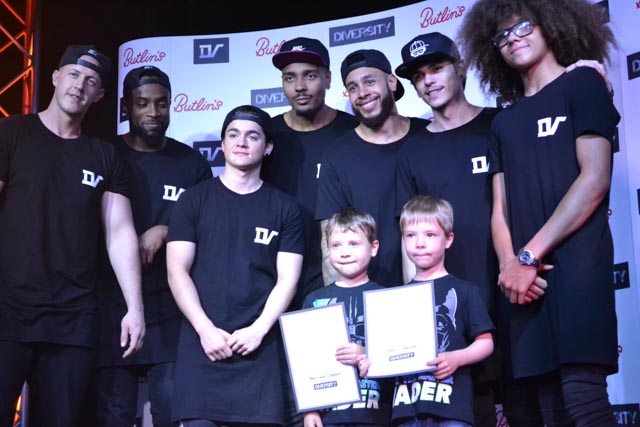 The accommodation was great, the food was fantastic and we were really treated like VIP’s. Once again thank you for arranging this for Benjamin and his twin brother Joshua.