At the crack of dawn on a cold mid-December day, a warm welcome awaited this year’s special children, families and team of volunteers at Humberside Airport ready for the annual flight to Lapland 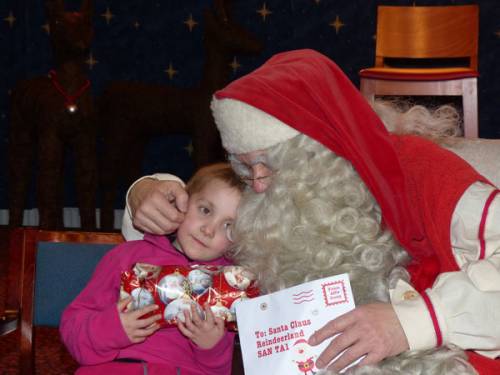 It was cold and dark when we arrived at the airport but as soon as we entered the terminal building the gloom and frost were replaced with the buzz and excitement that made you feel that something special was brewing. At 4am on a Tuesday morning, when these children and their parents should have been tucked up in bed, they would have been forgiven for being grumpy at the prospect of making such an early start, however there was no chance of that.

The children were greeted by ten 6ft tall fluffy cartoon characters handing out tasty treats and sweets to the children – Haribo Bear, the Energiser Bunny, Woody, a couple of M&Ms, a horse, a smiley dog, a cow, a dog and a lion, these characters were all provided by staff from the NISA head office based in Scunthorpe who had given up their time to make this part of the day fun and it served its purpose by making the time pass quickly. This was just the first indication that there wasn’t going to be a wasted minute or opportunity to put a smile on a face.

Our aircraft carried over 200 very special passengers, including 86 children and one parent/guardian, a team of 12 specialist medics (including our paramedics – one of whom we call Shorty who is about 6ft 7in tall and Lofty who is around the 5ft mark), several members of the media who were covering the event for local press and TV, celebrities and the staff and volunteers from the Charity. We were joined on the day by Laura Hamilton (A Place In The Sun), Chris Kamara (TV Football Pundit), and Emmerdale stars Chelsea Halfpenny, Jamie Shelton, Emma Atkin, Isabel Hodgins, Sammy Winward and Sophie Powles, all of whom gave their time freely to ensure the children felt like ‘stars’ on the day.

The 3 hour flight had no sooner taken off and then appeared Nutty Norman with his bright yellow suit entertaining the children all up and down the aisle with magic tricks, even though one of the little boys called Dylan was upstaging him with card tricks of his own! Chris Kamara was in his element singing songs and making fun of everything with his trade mark laugh. Half way through the flight the cabin crew invited the children to take control of the intercom system and turned it into 5 mile high Karaoke!

The Monarch staff on board the flight to Rovaniemi Airport also played their part in making this a special day. Woody (from Toy Story) was one of the cabin crew, the others all sported reindeer antlers on their heads and generous smiles on their faces. 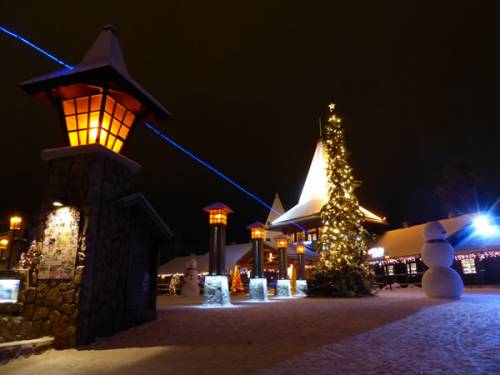 As we approached our destination the scene outside changed from the dark of night to a beautiful sunrise appearing above the pure white clouds. We dropped below the clouds to see even more white, but this time it was the perfect covering of snow on the pine trees that dominated the Finnish landscape. The Captain announced that he was dropping the temperature inside the cabin to help us prepare for the conditions that we could expect when we landed. This prompted a flurry of activity as everyone reached for their thermal outerwear, hats gloves scarves as the temperature dropped to the point where you could actually see your breath inside the aeroplane.

On landing, we were greeted at Santa’s official airport by Finnish ladies and gentlemen dressed in traditional costumes ushering us to our waiting coaches. The coaches took off along a snow covered dual carriageway and our Lappish hostess took to the microphone to explain what we were about to see in the enchanted forest, this lady would be our guide on each leg of the journey and managed to fill the time with stories of what life was like for the natives of her country –in particular about an elderly gentleman with a long white beard who most of the children were quite familiar with… After about 15 minutes we turned off the carriageway and off road into a forest signposted only by some lighted oil lamps. It was only 10:00 am in the UK but already the light here was beginning to fade.

A couple of hours were then spent in the Enchanted Forest, with time to enjoy the reindeer and huskies pulling sleighs, riding on the quad bikes and toboggans and sliding down the hills on sledges.

In the middle of the activity area was a large tented section with 3 or 4 tepees with camp fires inside where you could get escape the -12C temperature, but as we were shielded from any wind by the trees it didn’t really feel that cold. There was a large BBQ are where the only offering was sausages – 4 different kinds – and hot chocolate, these were all you needed to recharge the batteries for more snow related fun. This was also the setting for the fireworks that were to herald the end of our visit to the forest

Then it was back onto the coach where we headed to the Hotel Pojanhovi in the centre of Rovaniemi, where a delicious buffet lunch was served before Santa arrived. The celebrities took to the stage and began singing traditional Christmas songs and Carols and ended with a rousing rendition (or 3) of Rudolph the Red Nosed Reindeer which ultimately heralded the arrival of Father Christmas himself – the REAL Father Christmas, of course. 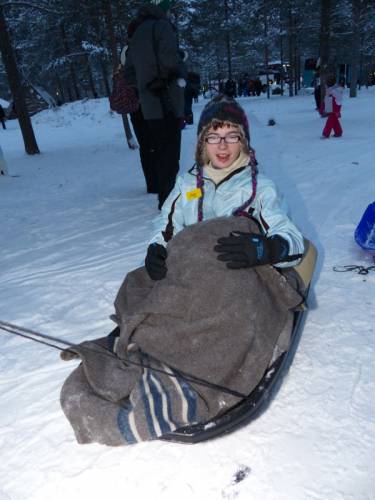 Each of the children took their place next to Santa and handed over their special letter in return from a beautifully wrapped gift. This was clearly the main attraction for many of the children, but the looks on the faces of the parents/guardians served as a reminder that this day was just as important for them as they were able to share a quality memory with their precious children.

Next stop was Santa’s village which meant another short coach journey and a final chance to capture some mementos of the day. As you entered the village you are met with Santa’s post office and some souvenir shops as well as a 20ft Snowman made with perfectly formed snowballs and a neon light display in the trees and shops that would rival Blackpool in September. Upon entering this area you are reminded that you are actually crossing over the line that denotes the Arctic Circle.  An hour in the village flew by and we were soon back on the bus to the airport which was only 10 minutes away.

We were back in the air shortly after 18:30 UK time and back on the ground in Humberside 3 hours later. As we stepped off the plane and into the terminal we were met by the cast of celebrities handing out goody bags and helium balloons and a local choir, Jopsox, had turned out to serenade us with more festive melodies to make sure the day ended just as joyously as it had begun.